This bespoke golfing tour was created for a client of DP&L Golf during 2016 and features some of Scotland’s best links courses in one amazing, scenic itinerary.

After arrival in Inverness, the capital of the Highlands, our clients were transferred by luxury mini-coach to beautiful Dornoch, home to the world-famous Royal Dornoch links. Here they spent two nights in the Royal Golf Hotel located almost on the 1st tee of the Championship Course. The group’s golf here included the classic Royal Dornoch links as well as the hidden gem of Brora where greens are still guarded by wire fence from the local wildlife!

They then moved down to the highly-rated Scottish Open venue of Castle Stuart, which is climbing the rankings as one of the best courses in the country. With luxurious onsite lodges, the tour stayed here for one night before they embarked on the trip over to Aberdeenshire for two nights in the luxurious Marcliffe Hotel & Spa. With golf to be played over another Scottish Open venue, Royal Aberdeen, it was then followed by another gem, Cruden Bay.

The tour then moved onto the “Home of Golf,” St Andrews, but on the way, stopped at what most say is the “toughest course on the Open rota”, Carnoustie, which will once again host the Open in 2018. After the round and a 40-minute drive, they arrived in St Andrews and checked into the Old Course Hotel, which overlooks the famous Road Hole, number 17 on the Old Course for a four-night stay. A round on the world-famous Old Course itself lay ahead, a must for every golfers’ bucket list, along with the tight and testing New Course before finishing on the Championship venue of Kingsbarns.

Finally, Edinburgh Airport ended what was a fantastic trip down Scotland’s North Coast and East Coast.

Enquire about this package

Simply provide your name and contact email or phone number and we'll get back to you during normal working hours. 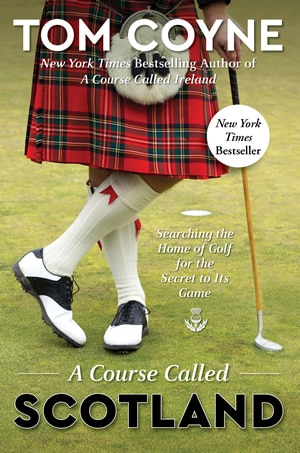 DP&L Golf are offering Tom Coyne’s New York Times Best Seller “A Course Called Scotland” to each group of four or more golfers that book any golf package for travel in 2021.

Package must include a minimum of 3 night's accommodation arranged by DP&L Golf.